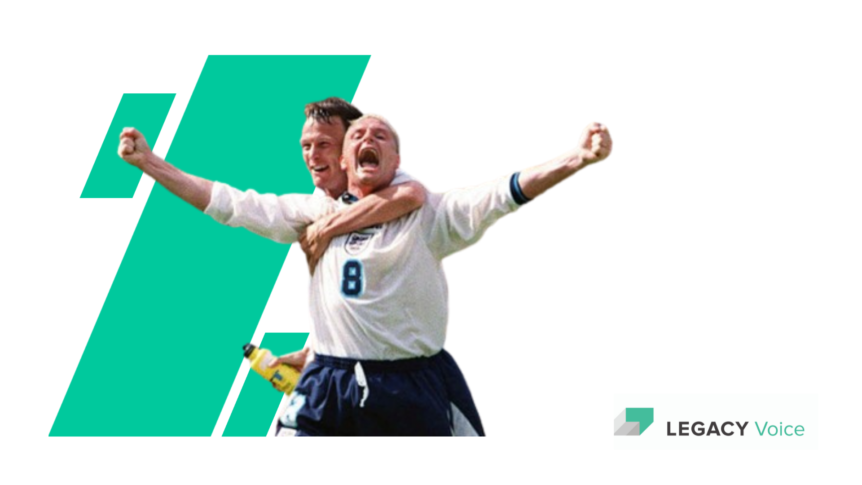 For those of a certain age, there’s a lovely BBC Five Live podcast to mark the 25th anniversary of England v Scotland at Euro 96, to get fans in the mood for the return of the world’s oldest international football rivalry at Euro 2020.

English and Scottish fans in our team started sharing memories of that day. Of how different it would have been if McAllister had scored his penalty. No Gazza’s Goal or the dentist chair celebration. And no Three Lions singing from the stands.

There’s a lovely moment in the podcast of a Scottish fan who brought with him in 1996 a piece of turf to replace the Wembley turf that was stolen in 1977 during the infamous Tartan Army pitch invasion. When Scotland fans in Tam o’Shanter hats dressed like Bay City Rollers fans, carrying Rod Stewart on their shoulders, and collapsing the England goals as they sat on the crossbars. You coudnae make it up…

And it got us to thinking about the power of football that connects across lifetimes and generations, and its potential for gifts in Wills.

In our 2019 report Giving Tomorrow – What will the sector look like in 25 years’ time? we predicted that rather than leaving one or two charitable donations, people will choose to split their giving between a mixture of national, local and international causes with football clubs, mosques, temples and local parks to benefit from a share currently reserved for big charities.

Football has all the ingredients that a charitable cause would love to have:

It’s a lifelong passion that borders on obsession; a shared tribal identity that gives meaning to peoples’ lives and a deep connection to a cause they want to preserve when they die.

Look at the recent fan revolt against the European Super League and you start to see the deep grassroots desire to protect the game’s future.

Its history is shared through treasured memories. I remember exactly where I was when England played Scotland 25 years ago: the pub where I sat with friends; and spilling onto Clapham Common afterwards, to play skins v shirts and get sunburnt.

It connects generations. Football is something you inherit. My father-in-law has been going to Anfield for 70 years and his three season tickets in row 11 on the halfway line will be inherited.

It has symbols and memorabilia that fans share and identify with. One of my life regrets is that I didn’t keep those Panini sticker albums from World Cup 1978 to 1990! I’ve heard the average age of Panini collectors is 50+. Perhaps there’s a legacy giving campaign in there somewhere involving old World Cup Panini stickers!

And its community is super connected – from grassroots communities to professional clubs to national teams and federations. There are online fan forums.

What could football and other sports learn from charities?

Obviously, gifts in Will and In Memory giving are a well-established income channel for many UK charities, generating over £4bn a year. It has propped up many charities during the pandemic where legacy giving has, in the main, performed better than most.

But there’s less evidence of it’s widespread use in supporting football clubs. Clubs and footballers have always been good at charitable support for local communities. But how much focus is there on attracting gifts in Wills to support the clubs themselves?

Unsurprisingly, Premier League clubs like Manchester United are encouraging their fans to leave a gift in their Will. The likes of lower tier clubs like Burton Albion are thinking much more locally, encouraging legacies to “make a positive difference for future generations in East Staffordshire”.

Perhaps local community is the lever for legacy giving to football clubs? Is this a stronger motivator than say, leaving a gift to your billionaire-owned Premier League club?

There was the case a few years back of fan Colin Rowell leaving Bishop Auckland FC £300,000 in his Will but is this more the exception than the norm?

At local cricket grounds we’re used to seeing park benches in memory of lifelong supporters. But how many are part of formalised In Memory strategies, or gestures to families close to those clubs?

We know that women are a big contributor of legacy giving to charities. Is this an opportunity for football? And the growth in women’s football and in the female audience for football would suggest

Finally, there’s the area of data, and in particular, the lesson from those charities who have developed successful stewardship programmes. It’s one thing getting a potential donor to enquire. Even more to get them to pledge. But there’s a lot that can happen over years to convert this to a legacy and the best charities see this as a relationship that is nurtured over time.

But there’s one group of football fans (and their data) that any charity legacy fundraiser would love to have at their fingertips.

They are the fans who visit the club every fortnight to take their seats – the impassioned, ultra-loyal, season ticket holders. Perhaps they form the key to legacy giving for football clubs.

Whatever happens in Euro 2020, whoever the victors and vanquished may be, football fans will be fans till they die, and will pass on their passion for others to follow.

For as Bill Shankly once said, and is often misquoted (and probably by me)…

Some people think football is a matter of life and death.

I assure you, it’s much more serious than that.